ShinGojira14 wrote:Unfortunately I haven't seen the original Japanese version of this film, so I can't give a definitive answer on how I feel about the original version due to not knowing how different it might be.

It's the same film, only in Japanese.
Save All Dubs. Sub All Tohos.

In comparing the Japanese language version with the International Dub, the English speaking characters (Blonde karate lady MechaG pilot and old scientist man) are SOMEHOW worse in the original version.

The International Dub, which is awful, somehow improved those performances. I don't know how that is even possible, but it happened.

^ Probably because the foreigners hired by Toho were usually not professional (or even amateur) actors. They got those parts because they were foreign and could adequately speak English. The export dubbers might not have always been good actors, but they had more experience.
Save All Dubs. Sub All Tohos.

I love this movie, definitely one of my favorite of the 90s Godzilla movies, if not just my favorite outright. Kazuma Aoki and Asuza Gojo are solid and interesting characters, Miki has much more of a purpose here than she did in the previous two movies and is also as solid of a character as she was in GvB. Godzilla has character beyond just mindless rage, and you feel bad for him as Mechagodzilla cripples him and tears him apart. The kaiju fights here are super good. Godzilla vs Rodan is a tense and brutal bout. The final battle is amazing from start to finish and never gets boring. Effects are super good (mostly, Rodan flying leaves a good bit to be desired).

The manga adaptation has something which fixes the big issues the movie has. Mainly, in the final act, a virus from the MKG components, makes MG go berserk after incapitcating Godzilla. it proceeds to run amok....hmmm wait, haven't seen heard this somewhere before? 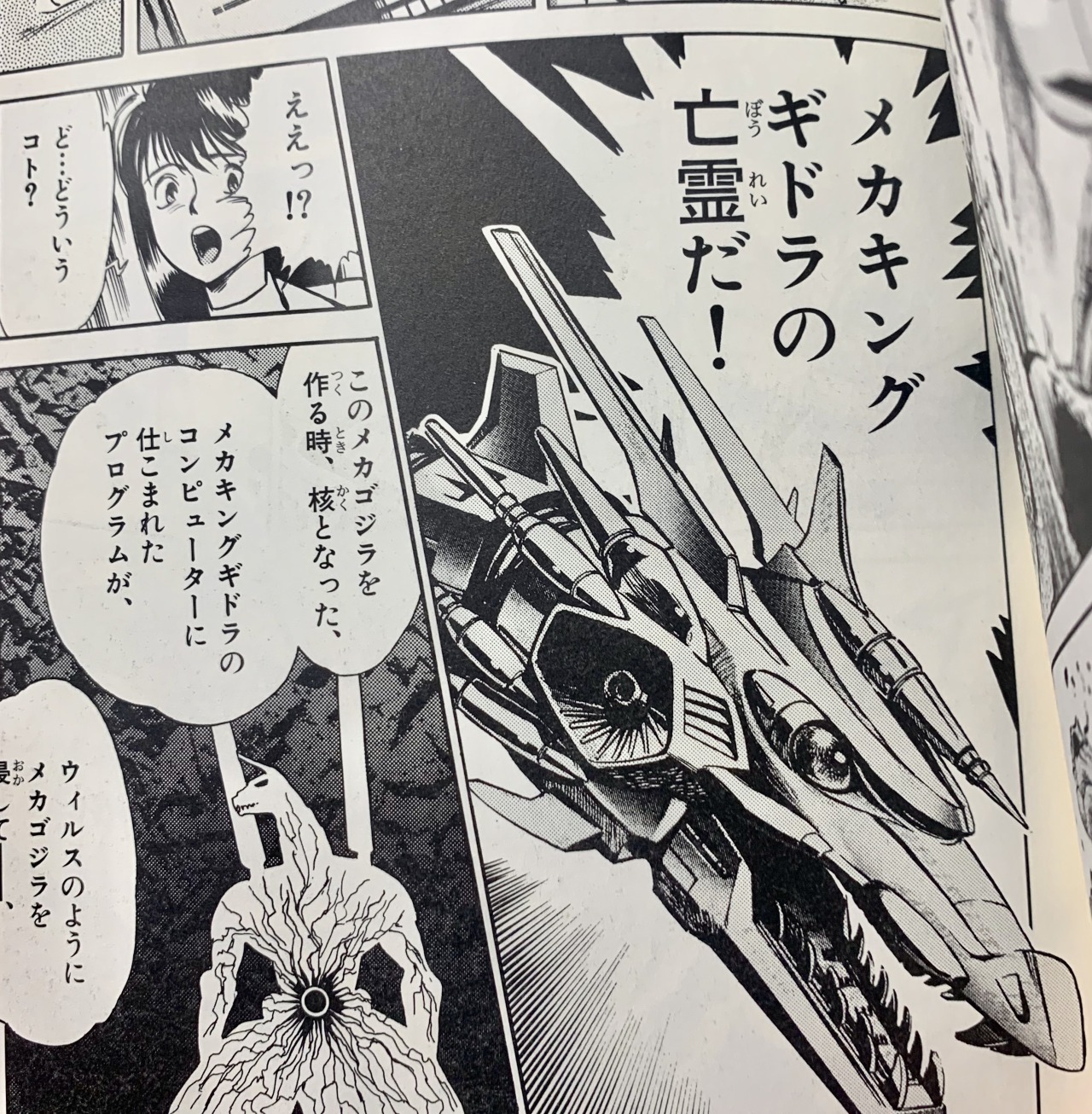 Anyways, MG starts to violently torture Godzilla, and the manga is pretty clear this is horrible. MG proceeds to kill Godzilla, straight up, and then Rodan tries to save Godzilla and baby but is horribly killed too. 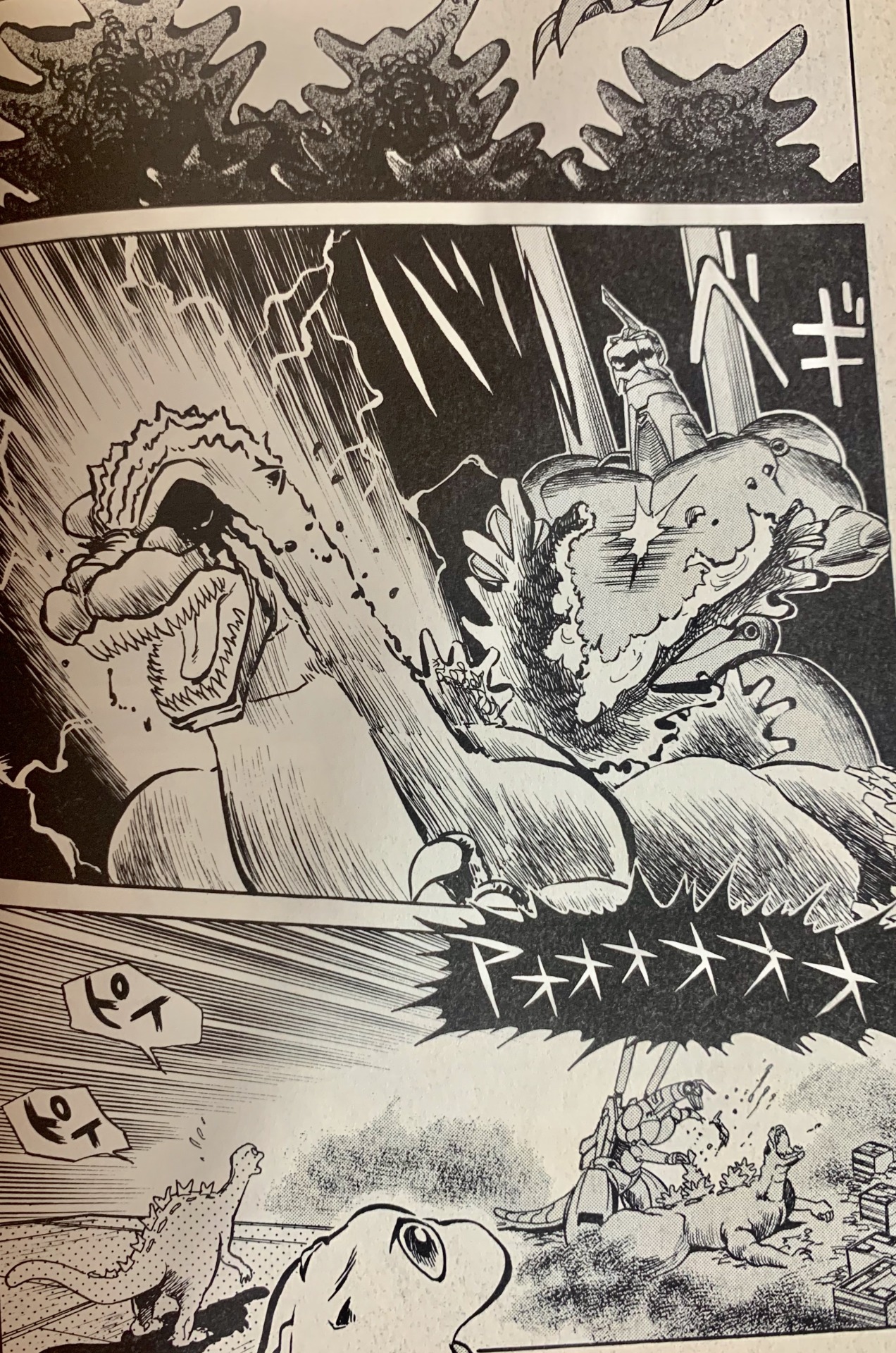 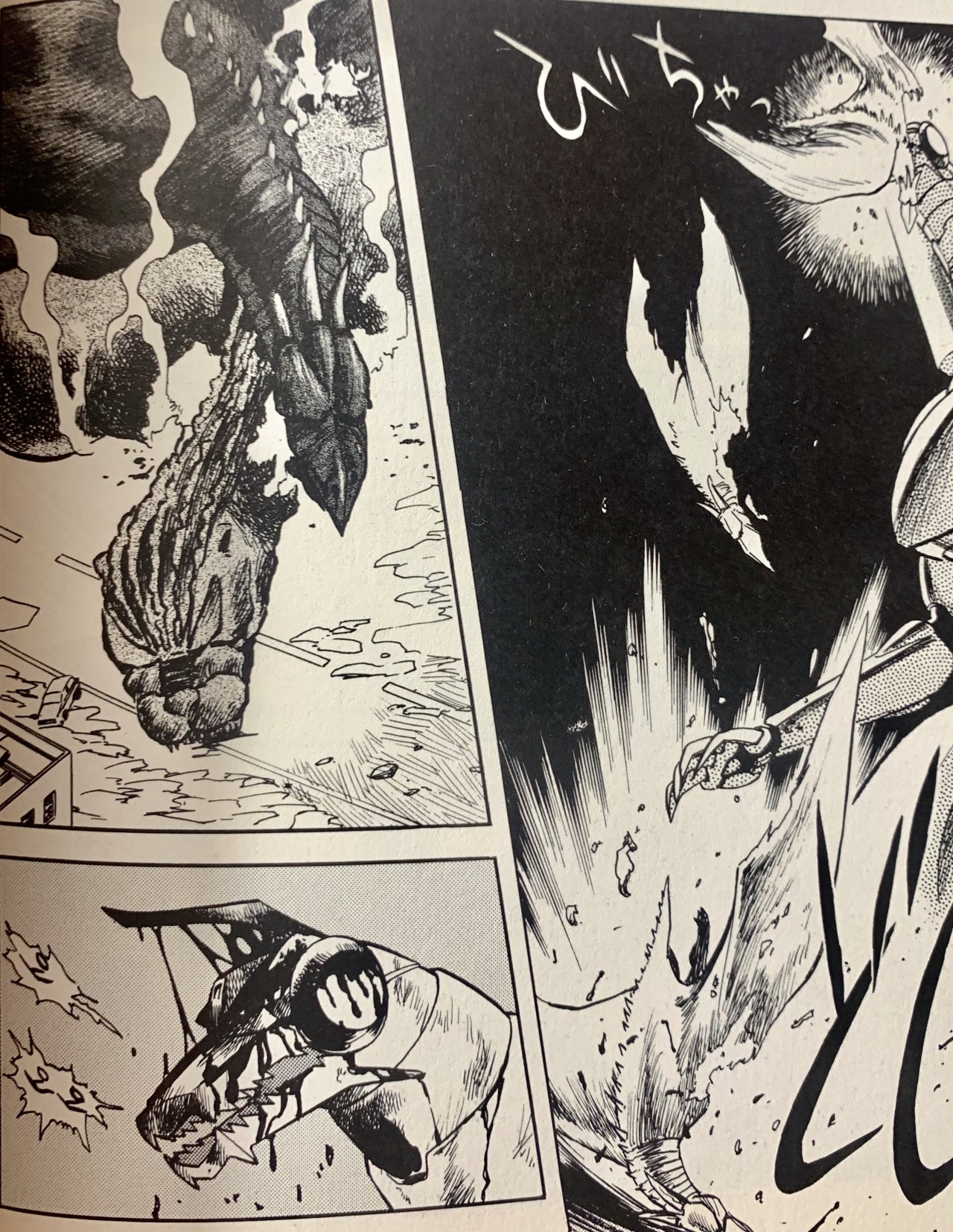 Like usual, Godzilla is revived from Rodan, but the battle plays out differently. MG is about to murder Baby. And: 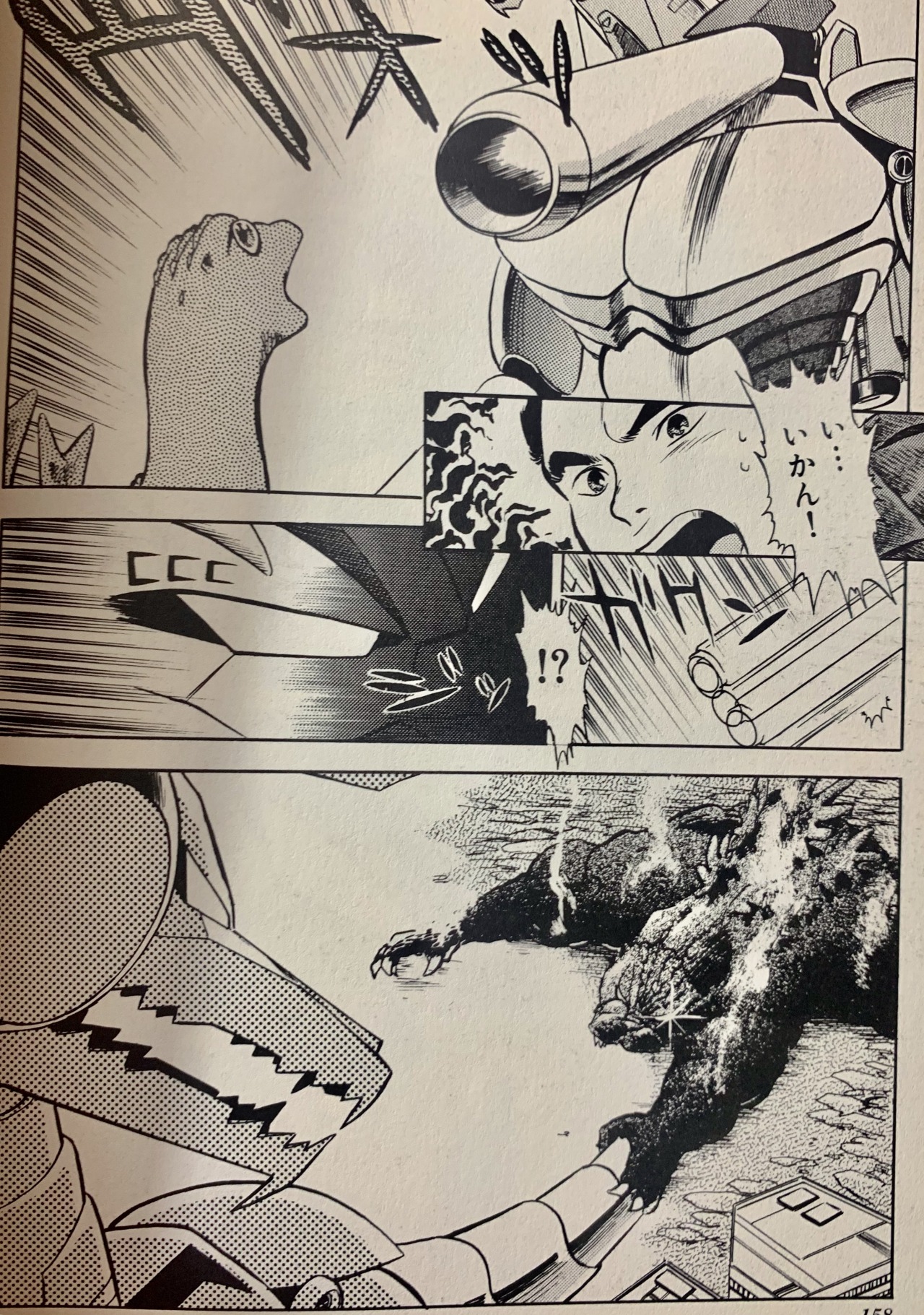 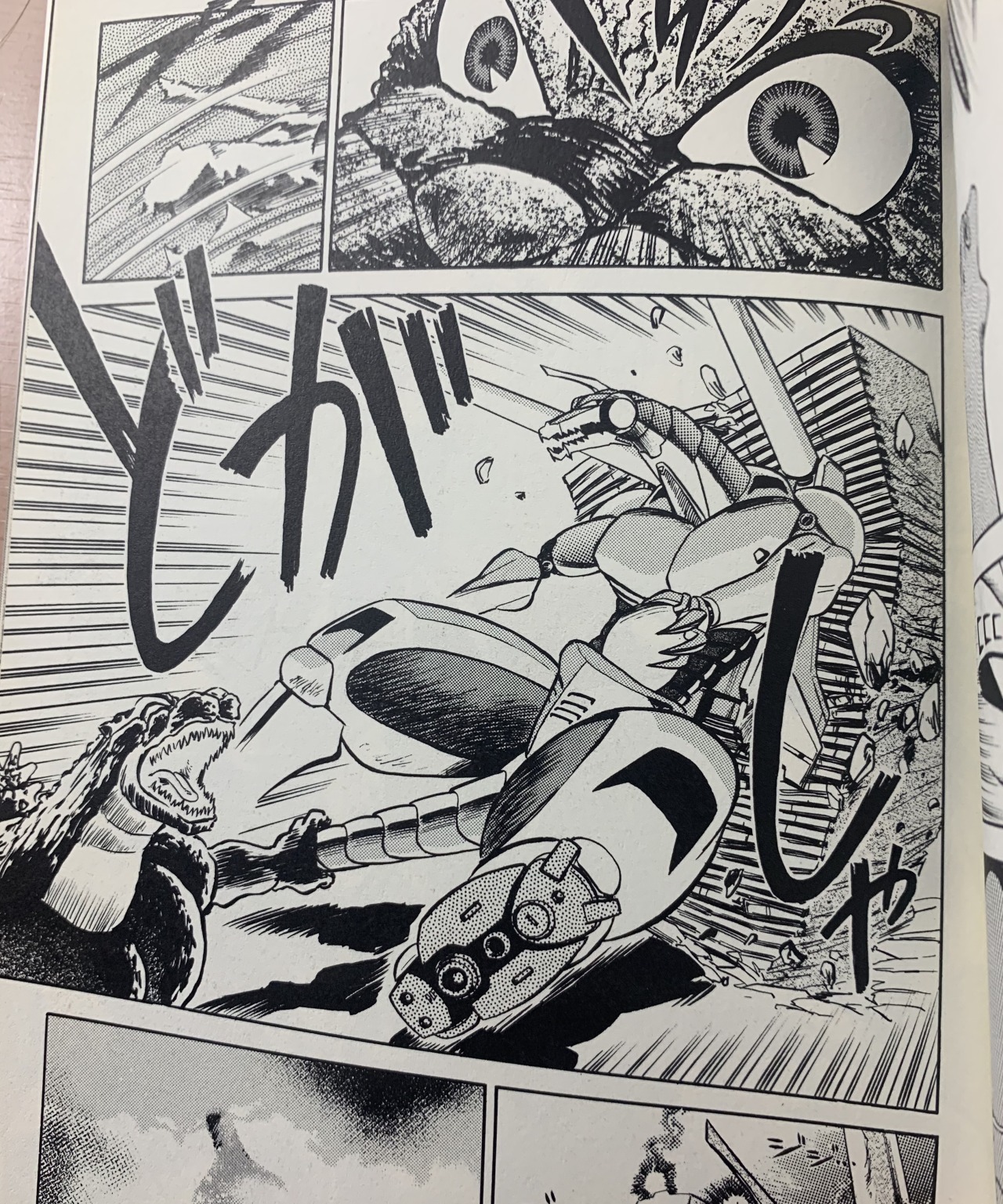 Mg keeps fighting, and despite being continually wrecked, keeps getting up! A berserk shell of MG continues attacking. It's final attack is latching onto Godzilla in desperation, and exploding, though Godzilla survives: 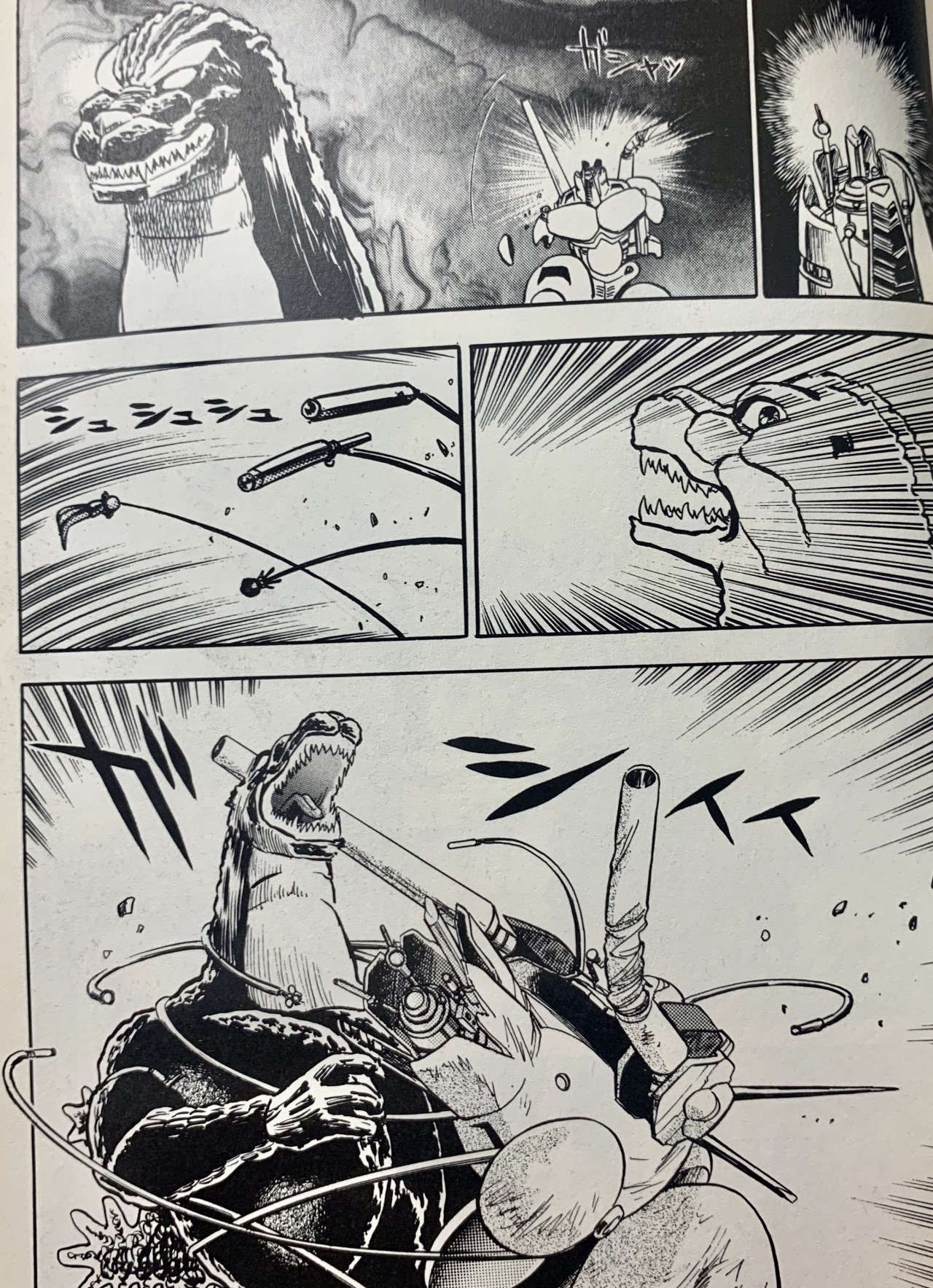 I thought the manga had a better idea of how to have an actual villain. Sure Godzilla and Rodan are pests in the first half, but they're clearly just interested in the egg. The way MG is portrayed when it becomes berserk, makes it clearly out to be the final villain. Additionally, the way it fights back against Godzilla after being revived is more interesting than what the movie does.

I love that Manga. The fights are so intense and it feels like the stakes are much higher than in the film.

Actual signature from TK/Gojistomp, Circa 2005

shadowgigan wrote:I love that Manga. The fights are so intense and it feels like the stakes are much higher than in the film.

One of the few times the violence works in service of the narrative. You feel bad for Godzilla, and see it's complete overkill. The movie itself is still sympathetic towards Godzilla, but has him rampage a lot more. It allows for MG to become the definitive villain.

Ripping Godzilla's plate in half like that is straight messed up. That's Ultraman-level whatthefuckery. I'd kind of like to see some sick villain (it seems right up Destoroyah's alley) try that in a movie, only to have Godzilla charge up his ray and release it explosively through the damaged plate and into the villain's face.
"Stop wars and no more accidents. I guess that's all I can ask." -Akio

That sounds like something a future MG would face while fighting Shin Godzilla.
Kaiju are just like people- giant, radioactive people.

So basically the Manga Heisei Mechagodzilla was Kiryu before Kiryu was a thing?

I'll admit if this brutal side of Mechagodzilla or the callous nature of it was displayed in the final fight with Godzilla I would have liked it more. Rather than finding it one of the most boring "antagonists" in the history of the franchise.

I dunno, one of the things I actually really like is the ambiguity of the final fight not having a distinct "good guy" and "bad guy," and that our allegiance shifts to Godzilla more because of a sense that G-Force is going too far despite basically good intentions.
Tokyo, a smoldering memorial to the unknown, an unknown which at this very moment still prevails and could at any time lash out with its terrible destruction anywhere else in the world.

We can basically thank Miki for that impression. Her reluctance to target the sacral brain makes the order to attack Godzilla seem cruel.
Kaiju are just like people- giant, radioactive people.