For the discussion of Shin Godzilla, the Godzilla anime trilogy and Toho produced and distributed films after 2015. Includes US movies financed by Toho like Detective Pikachu.
Post Reply
106 posts

tbeasley wrote:Another Wiki find... says it's a First Form from Bullmark but the design doesn't match the tail we see in the movie 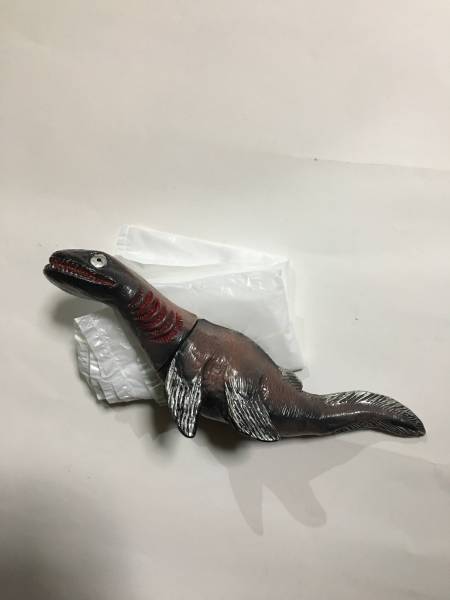 But yeah, arguing semantics in a monster movie is kind of beside the point. It's always gonna be a mix of what makes 'sense' and what looks cool or interesting visually. I mean, they say he's some kind of sea reptile in the original but he's this upright walking thing with plates down his back. More than anything, including Shin, his look is meant to connote something prehistoric and mysterious. He's become the ultimate throwback to antediluvian monsters over time.

Ah that's actually really cute, I kinda wish that was the first form, or the creature prior to the mutation. I wouldn't put much stock in some toy, but damn that'd be nice.

And yeah I think you put what I was trying to say better and more politely, that arguing what exactly it is kinda completely arbitrary. To me he's his own creature.

You know, it looks like a modified version of the 50's-60's era Marx Kronosaurus figure: The entities growing on Godzilla’s tail at the end of the film are NOT offspring, or “minions”, that is the new form he was trying to take in response to being taken down by a group effort.
It took an army to beat him, so he becomes an army to counterattack.

Also it was stated at one point during the film that Godzilla could potentially evolve into a form much smaller than his current self (Form 4) and gain the ability to fly, I myself believe this was foreshadowing form 5 and their potential traits. I feel like form 5’s big feat. would be the ability to take flight and spread itself through other parts of the Earth. Rapid colonization. Aka, the end of the human race.

I was kinda underwhelmed by how Shin Godzilla was treated like in the film.
In promotions and everything said before movie made it look like he was a literal god, or at least, a super OP being, and the movie itself teased us with the "Evolution Incarnate" thing.
Compared whith what everything was saying, Shin was underwhelming.
The movie was still good, and Shin is an excellent monster, but I expected a whole lot more of him.
All houses have the same. Roof. Floor. Walls. People yelling at you that they're calling the police because you broke into their house. It's only when you give them love that they truly become Home My only complaint about this Godzilla is the lack of any real personality to it. Wasn't fond of the design but it grew on me and is one of my favorite looks for Godzilla.

Godzillian wrote:My only complaint about this Godzilla is the lack of any real personality to it. Wasn't fond of the design but it grew on me and is one of my favorite looks for Godzilla.

I hear a lot of similar complaints about this Godzilla (usually by ankle biters who think its good film criticism) but I never felt it's lack of one was necessarily worth paying attention to. Ignoring the film, the design and abilities it has alone are good and unique differentiators and I'd argue it's lack of character basically is it's personality. You don't really get many apathetic versions of Godzilla.