For the discussion of Toho produced and distributed films or shows released before 1980.
Post Reply
98 posts 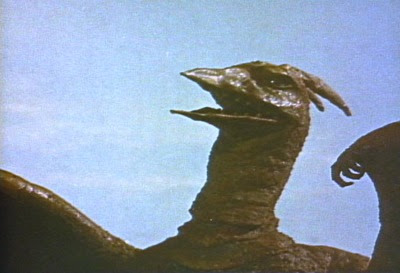 You know him, you love him - one of Godzilla's most beloved allies, Rodan.

It's always shocked me how little Rodan has actually been used since the 60s. It's as if he's gone from one of Toho's all-stars to a trivial supporting character.
I don't think I saw the same movies as the rest of you.
I'll always miss Vega.

Well... it is possible that Rodan just moved into whatever standard eco-life it was suppose to have. Sailing down from the top of some remote south sea island and consuming large marine life.
Most likely not wanting to have anything to do with humans, aliens or any civilzation and simply just being a Giant Mutated Flying Prehistoric creature.

It is a simplistic ending for Rodan. But not a bad one (Chronologically speaking Rodan appeard in DAM and did not seem any worse for wear. So obviously life had been good).

Ohhh Rodan, such a great kaiju, but he always gets shafted. He deserves a revival. He is a loyal ally, and very powerful as well.
#1 DEXTER FAN ON TK!

I wrote:skreeonk the Dave the isn't footings happen

I like the wings on this Rodan over the Heisei one. He's pretty cool. The sonic boom wings are actually threatening
Formerly known as godzilla2001.
Power corrupts. Absolute power corrupts absolutely. Yeah moderators!
@ omgitsgodzilla, the double rainbow means that Godzilla is on some really good poop

I don't know if I have ever read anything about this. But how difficult was it for the suit actor to move in the Rodan suit? It seems like its pretty cumbersome. Nothing seems to come to mind/memory offhand about it.

Rodan's a great kaiju, very simply yet iconic. But, I can't really see him as Godzilla's sidekick. Maybe as a partner out of necessity, but other that that he should be a pretty independent beast. He's tough enough to hold his own with many a monster.

Rodan can stand alone... or together as a total equal.

Guardian7 wrote:I don't know if I have ever read anything about this. But how difficult was it for the suit actor to move in the Rodan suit? It seems like its pretty cumbersome. Nothing seems to come to mind/memory offhand about it.

Well, Mr. Nakajima talked a little bit about it at G-Fest 2008...but didn't really get into those kind of details. He told a story about when the wire broke that was holding him up (when Rodan crashes into the ocean with a bridge seen in the background, only to fly back out shortly after). Sounded pretty scary, actually.

Rodan 56' is one the best kaiju designs of all time. It just looks great and lifelike overall. It's a shame the 60's Rodan's didn't look as "cool", but at least he was still a powerhouse.

The funny thing is rodan appeared in the showa,hesei, and millenium era making him one of three era kaiju.

Mike55 v2 wrote:The funny thing is rodan appeared in the showa,hesei, and millenium era making him one of three era kaiju.

He deserved to. At one point, Rodan was considered one of "Toho's Big Four" along with Godzilla, Mothra and King Ghidorah.

Since then, though, his overall importance has dwindled a lot and Mechagodzilla has taken up his spot in the "Big Four" (...it's sadly fitting that he even killed Rodan in the 1993 film, taking that into consideration).

Still, I would love to see a proper revival of the character. He was great in the Showa series, especially his debut film which is one of the better kaiju productions Toho produced.
If it bites... don't mess with it!

He has a great antagionistic partnership with Godzilla. I've always liked the idea of these two fighting. It's a shame he had to get shrunk so much for the Heisei version. He's much cooler being taller then Godzilla and burrowing underground.
“I have never listened to anyone who criticized my taste in space travel, sideshows or gorillas. When this occurs, I pack up my dinosaurs and leave the room.” - Ray Bradbury

Personally TVigilante - I think the only thing that Rodan retained in his HEISEIera stuff WAS his tenacious and tough demeanor.
I think the design was hideous... Fine for maybe another flying creature... or possibly a relative of the ACTUAL Rodan. But certainly NOT the Primal Rodan I prefer.
Actually... the HEISEI battle between Godzilla and Rodan is one of my favorite fights in the entire series.

I am curious. Who here thinks that the Rodan that went on in the SHOWAera stuff was the baby one that hatched out of the Egg? after Rodan's parents had actually perished in the lava flow.

Can you imagine if there had been Three Rodans? That would have been crazy!

Guardian7 wrote:Exactly... Anguirus is like Robin to Batman... as Rodan and Godzilla are like Superman and Batman.

Rodan can stand alone... or together as a total equal.

That is what I've been saying all along. Well put Guardian7!

Toho (the people who actually make the movies!!) states that its the sam one...

i also think like Lamango. despite what toho says... i still tell people that there must of been one more egg in the volcano and it hatched into the new rodan.
Don't try to be something else. Don't try to be less. Great things are going to happen in your life. Great things. And with that will come great responsibility.

Well, it seemed pointless to me to make three different Rodan threads... if I gave Rodan 56 a thread, I'd have to give his mate a thread.

Like with Anguirus, the 50s version'd be virtually disregarded. As much as I'd love the extra posts, I've stopped caring about post count.

Besides, TK's main bios only list one Rodan bio, and one Anguirus bio
I don't think I saw the same movies as the rest of you.
I'll always miss Vega.

Tyler wrote:In the damn movie it says it's one of the original 2 Rodans.

Read carefully next time. The Princess (as the Prophet) clearly mentions that Rodan has been "revived".

Well I'm not going by the dub.

Obviously, liberties are taken with the dialogue when things are dubbed into another language. Especially with dubs that aren't faithful to the original script in the first place.
Last edited by Goji on Sat Aug 14, 2010 10:44 pm, edited 1 time in total.

Arbok wrote:...it's sadly fitting that he even killed Rodan in the 1993 film, taking that into consideration.

Heh, never thought of that.

I highly doubt the people who made the dub knew or cared about the original Rodan film, so I don't think they were trying to create any continuity between the two movies. They probably meant revived as in "waking up from suspended animation," because if you haven't seen the original film, you'd have no idea what Rodan was doing in a volcano besides "it's been entombed there since prehistory."

As for the Japanese version, I have no idea whether it's supposed to be the same Rodan or not.
"Mercy is the mark of a great man." *jab* "Guess I'm just a good man." *jab* "Well, I'm alright."

This is an interesting discussion. I remember when I joined the fandom back in 2005 though, Rodan was generally regarded as a third one of the species, but I also think it may have had to do with the fact Ghidorah was not available on DVD, so most newer fans were unaware he rose from a volcano.
I don't think I saw the same movies as the rest of you.
I'll always miss Vega.
Post Reply
98 posts