For the discussion of Toho produced and distributed films or shows released before 1980.
Post Reply
556 posts

HedorahIsBestGirl wrote:- The monsters talking is not okay. Whether it's voices or speech bubbles, just no. It was bad enough with Minilla in a dream in Godzilla's Revenge, it's worse here.

I agree with the vocals in the dub being atrocious, but I think the speech bubbles are genius. It's a stylistic choice, that intentionally adds to the backdrop of the film having a "manga" style that is pervasive throughout the film. We see this with the lavish outfits, the design of the outfits, the profession of the lead, and how the films 'elevator bomb'.

Also I love the ending music!

I'm so glad you made this point, because I'd never really thought of Godzilla vs. Gigan as live-action manga before, but now I see it and it just makes me enjoy this movie more. I retract what I said about the speech bubbles; looking at the film through this lens, they totally fit. But yeah, the voices in the dub are godawful. We'll have to agree to disagree on that song though.
The sea has cobalt, it's full of mercury. Too many fumes in our oxygen!
All the smog now is choking you and me. Good Lord, where is it gonna end?
Got to get it back, someday. Got to get it back, and soon now.
For tomorrow maybe you and me...
We're movin', we're movin', movin' to the Moon now!
It's up to us to make a choice.
We know what it's worth to save the Earth!
Top

The English-dubbed version of Godzilla vs. Gigan is a masterpiece.
Save All Dubs. Sub All Tohos.

I would argue with that statement if it wasn't true
You fool, I'm no mere super godzilla. I'm a godzilla that has ascended past that form
I AM...
ULTIMATE GODZILLA 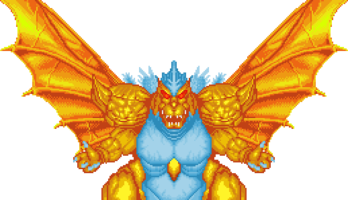 I prefer the sub myself.
Even a man who is pure at heart and says his prayers by night, may become a wolf when the wolfbane blooms, and the autumn moon is bright.

Terrible movies with awful shameless stock footage everywhere but it introduced Gigan who is an iconic and unique monster in his own right. So if I am bored enough I will watch this every now and then.
Top

Teruyoshi Nakano: I hated it, but there was no choice. Of course it hurt me when I had to re-use those scenes, but there was no other way - we did not have the time or the money to film new scenes.
Save All Dubs. Sub All Tohos.

Where is GvG generally considered on the scale of G films? I still love it for a few reasons, Godzilla tower (such a unique "building" set piece), Godzilla and Anguirus' brotherly bond (plus their suits were fantastic), Ghidorah and Gigan were the best duo in the franchise (outside of G and Angy), and the whole "corporations = bad" plot was pretty decent.
Last edited by _JNavs_ on Mon Sep 23, 2019 7:59 pm, edited 1 time in total.

I am Become Death, King of the Monsters.
Top

I think most fans are well aware of its flaws but there's definitely a contingent that regards it well because it's just a lot of fun. The average G-fan probably puts it somewhere in the middle of the pack.
Save All Dubs. Sub All Tohos.

For me it always ranks at the bottom due to all the issues I have with it. The biggest is the stock footage, every time there is a cut, the difference in quality is so jarring between the stock footage and the new footage. The day to night filter doesn't help. Too often with the new footage KG is immobile which is a stark contrast to previous footage used. The whole thing with Anguirus swimming to Japan, getting shot at with Masers, then going back to Monster Island, just to leave again with Godzilla is such pointless filler.

The human characters are about the only thing I enjoy when watching the film.

I will watch it again once I get the Showa collection in, I plan to rewatch everything in order, but I don't think my opinion will change much.
Godzilla Screen Time
http://jokercluster.blogspot.com/
Top

_JNavs_ wrote:Where is GvG generally considered on the scale of G films? I still love it for a few reasons, Godzilla tower (such a unique "building" set piece), Godzilla and Anguirus' brotherly bond (plus their suits were fantastic), Ghidorah and Gigan were the best duo in the franchise (outside of G and Angy), and the whole "corporations = bad" plot was pretty decent.

When I first got on the internet back in 96 or so, it was generally listed towards the bottom.

In recent years though, more fans seem to be have been kinder to it.

Personally, it was one of my favorites as a kid, and then when I got older, I turned on it when all the issues with it became more obvious and I listed it towards the bottom myself as one of the 5 worst entries. With a little more time and reflection, I now find myself looking back on it more fondly, warts and all.

In many ways, it suffers from the same issues Godzilla Vs. Megalon has, but where as that film is near unredeemable outside of its cooky climactic battle, Godzilla Vs. Gigan has a little bit more to offer.

For starters, it gave us Gigan, who is easily one of the coolest Godzilla foes. To me, this was also cemented Anguirus' legacy as Godzilla's best sidekick, which is funny because I believe he was in this film just so they could use stock footage of him from DAM, but he's such a tough and tenacious guy that its hard to dismiss him. And to this day, I will always remember my jaw dropping when Godzilla bled, which I didn't even know was possible until this film. Also, while King Ghidorah is clearly there just to use stock footage, his presence elevates the film. Even in the 70s, Ghidorah being in a film added a little extra sizzle to the steak.

I also kind of like the human cast as well. They are basically a Scooby Doo gang, minus the dog, but there is something oddly appealing about a cartoonist, a hippie, and a girlfriend with a blackbelt all trying to uncover an alien invader conspiracy. I am also surprised at how effective tense and dramatic the sequence of Godzilla being burned down by the Godzilla Tower. Thinking about my reaction as a kid, I actually thought Godzilla was going to die, so I cheered when the humans saved his life, a first for the series (their method of saving him was a bit wonky, but whatever).

There are obvious negatives to the film: Its obviously low production values (use of stock footage, the hilariously bad Ghidorah puppet, Godzilla suit falling apart, etc.), the aliens' being kind of dumb with executing their plan, Godzilla and Anguirus talking, and a couple of other things. However, I've gotten to a point where I can accept the positives of the film I view it more favorably.

The musical score for the film basically serves as a microcosm for the film. Basically, all they did was recycle Akira Ifukube's work from previous films. On the surface that can be seen as lazy or a quick way to cut corners and work within limitations. But, even with such a cost cutting move, the music cues they picked are great and perfectly accentuate the best moments of the film, so even with their hands tied, they managed to make something good out of it.
Last edited by GojiDog on Wed Sep 25, 2019 12:04 pm, edited 1 time in total.
White Male Genocide is necessary.

I hope whoever edited this movie's soundtrack got a substantial raise or promotion. Everything from the selection of cues to how they're used in the film is perfect. I've always loved that the monster battle music plays at a low volume during Gengo & friends' Tower escape and infiltration sequences. It's almost like the music is part of the battle and can be heard off in the distance.
Save All Dubs. Sub All Tohos.

Terasawa wrote:I've always loved that the monster battle music plays at a low volume during Gengo & friends' Tower escape and infiltration sequences. It's almost like the music is part of the battle and can be heard off in the distance.

I've always thought that as well, that the music is off in the distance. And really, it almost feels like that was the intent. Otherwise, why would they be playing music during a scene and then play it so quietly? It's a small detail about the film I've always loved.
"Name me one fight where Anguirus didn't get his dick kicked in."
Top

Yeah it does have a pretty good cast doesn't it? The movie certainly looks really good.
About all Godzilla vs. Megalon has is Megalong and it took Jet Jaguar a decades with a video game and Rulers of the Earth to get love.
Oh and the damn sequence.
Top

This movie is better than it has any right to be.

haha thanks for link. Good to see the director had standards. It makes sense though given the budget for Godzilla movies at that time.
Top

It was actually the first or second Godzilla movie I ever saw as a kid (the other was the original), so since I hadn't seen most of the previous movies I had no way of knowing this movie was even using stock footage from them, therefore I wasn't bothered by it. So it ended up being one of my favorites and is probably a big reason why I prefer Godzilla to be heroic to this day.
Top

I never gave the stock footage much thought as I just watched it to enjoy it. I can tell what scenes are reused, but given how tight production budgets were, they made a good film.
Even a man who is pure at heart and says his prayers by night, may become a wolf when the wolfbane blooms, and the autumn moon is bright.

Terasawa wrote: I've always loved that the monster battle music plays at a low volume during Gengo & friends' Tower escape and infiltration sequences. It's almost like the music is part of the battle and can be heard off in the distance.

You know, that's one of those subtle stylistic choices that never quite registered until now. I've always seen "Gigan" as doing a much, more efficient job of piecing together the stock elements than "Megalon".
Check out the PG version of my short film, "Destroy All Sisters"

IMO this movie is how to make a good movie when you only have enough time to use stock footage for most of the effects bits.
Last edited by Living Corpse on Wed Nov 13, 2019 11:55 pm, edited 1 time in total.