For the discussion of Toho produced and distributed films or shows released before 1980.
Post Reply
10 posts • Page 1 of 1

Couldn't find a topic of this lost flick, and this particular entry might be my favorite out of the lost ideas we have. All the information I gathered comes from THE BIG BOOK OF JAPANESE GIANT MONSTER MOVIES: THE LOST FILMS.

The basic plot of the story has to deal with another alien race coming to Earth, demanding Japan to give up their land in 10 days, in which Japan refuses. Not long after, a hurricane soon starts to devistate Japan, and it's revealed Gigan is the one behind it, being controlled by the new aliens. Godzilla sets off to face off against Gigan once again, but the new alien race have a new mechanical monster named Chamelegon. Chamelegon however, is made out of some space metal that makes it invisible to the human eye. When Godzilla goes up to fight against it, the people of Japan think that Godzilla has reverted back to his destructive self back in the 50's and early 60's. A series of fighter jets would then attack Godzilla, making him blind in both eyes, making Godzilla retreat. The new alien race demands the humans in japan to surrender, which they still refuse. In anger, they send in Gigan and Chamelegon to destroy whats left of Jpaan, but Godzilla soon arrives to defeat the two.

Characters that would have been included are:
Prime Minister
The Titan Aliens
Yosuke Mitsumooto: A young Scientist
Emi: Yosuke's fiance and a reporter
Zentaro: Emi's photographer
Hayato Ichimonji: A pilot and loves Emi

If you could post some pictures from the book that would be great.

LSD Jellyfish wrote:If you could post some pictures from the book that would be great. 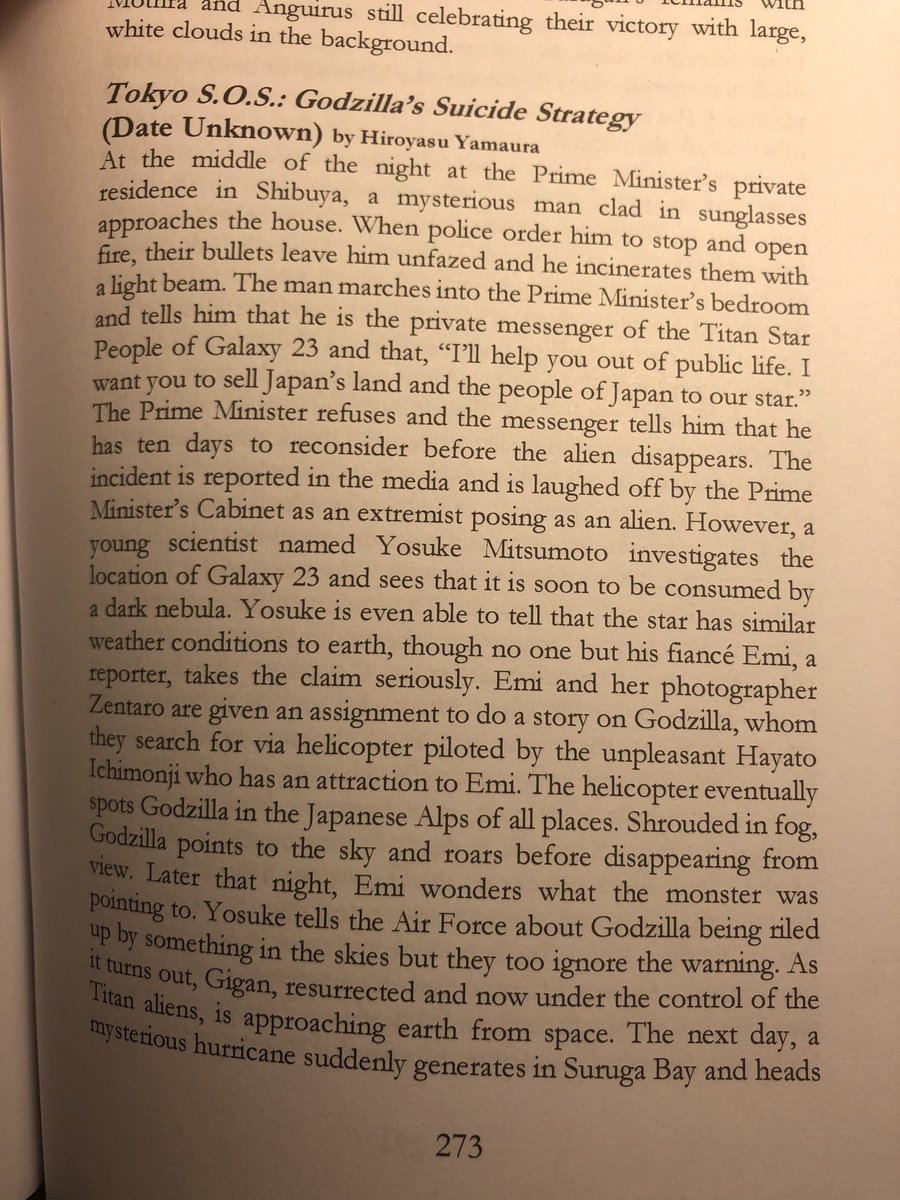 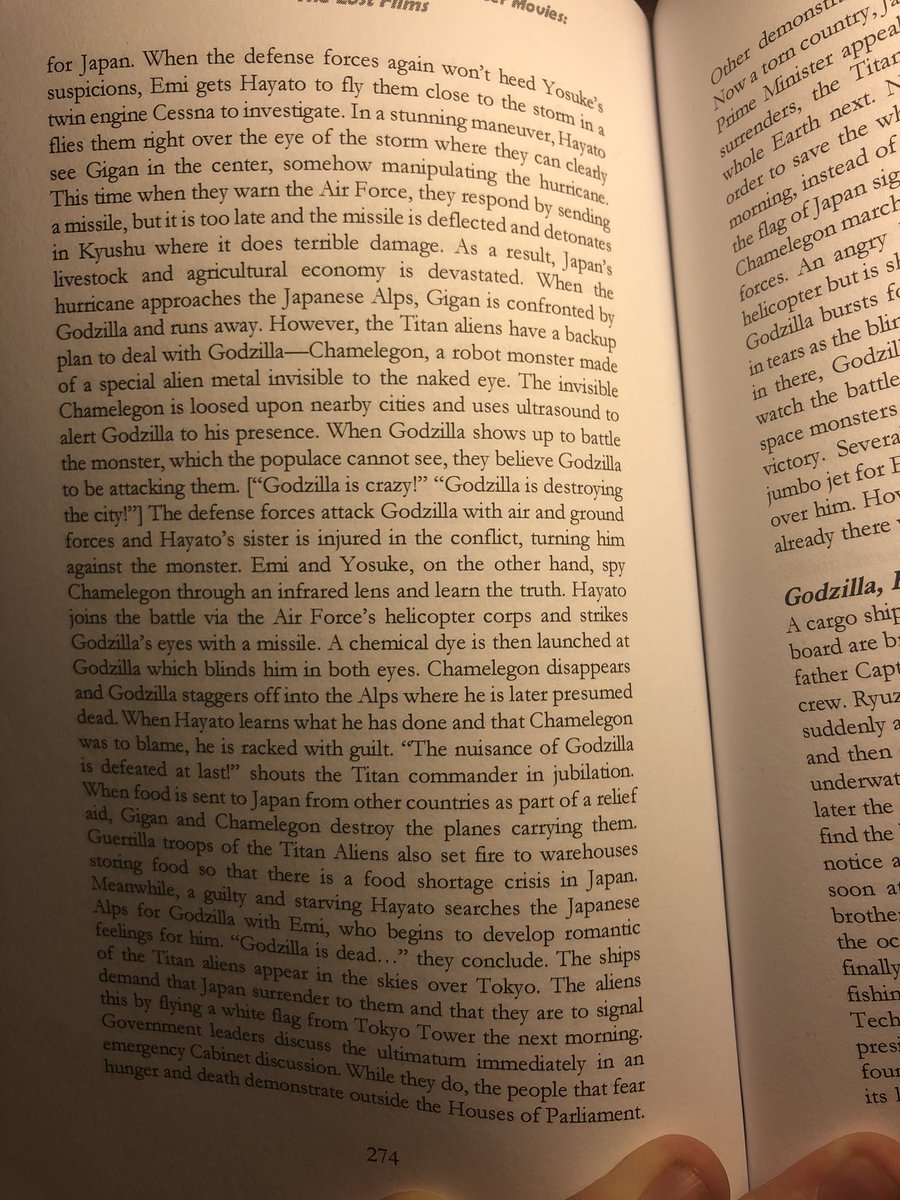 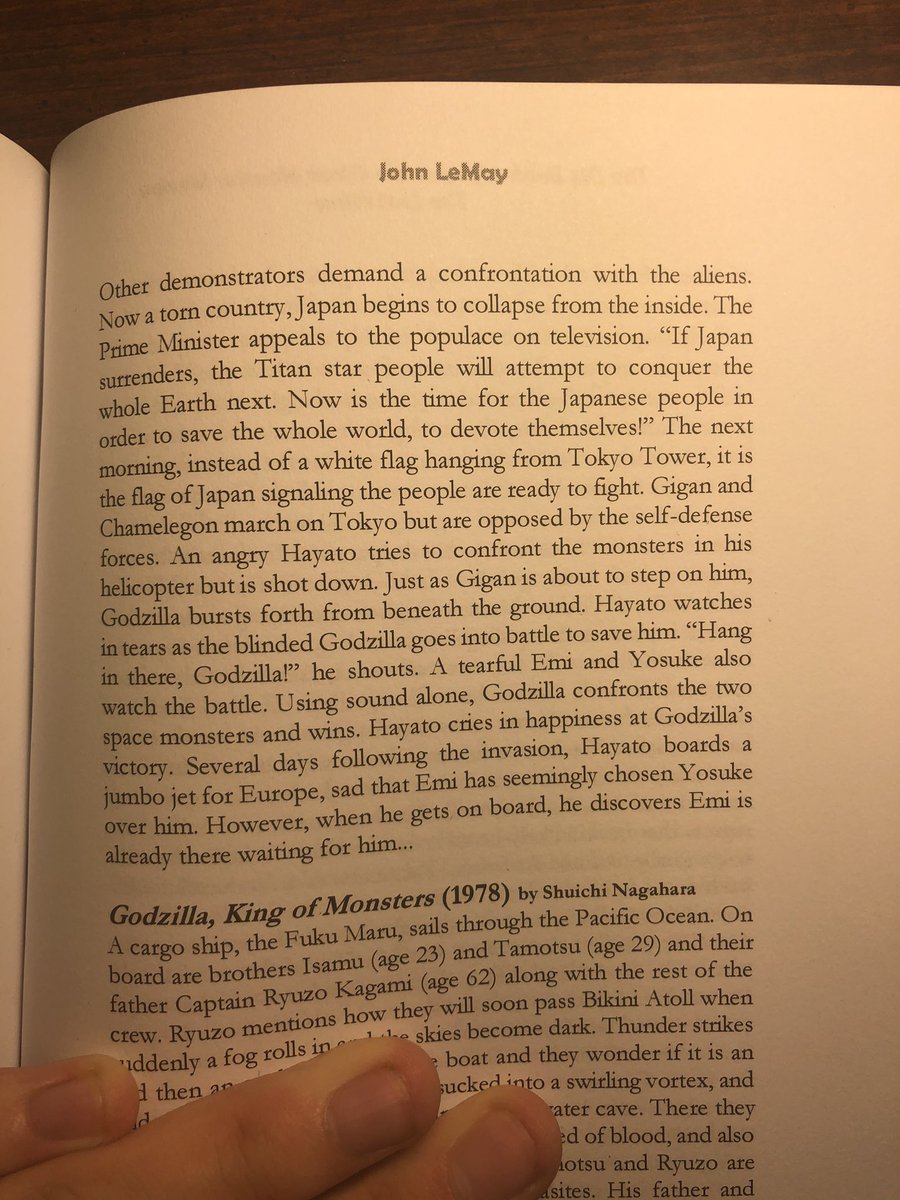 Yeah, the whole plot seems to be a big Showa homage, in a classical way. The whole,”Alien enters prime ministers residence heavily reminds me of how in a lot of showa era Toho films, aliens/crooks would sneak into a location. &’ thinking about the aliens that try to steal the statue in Godzilla vs. Mechagodzilla.

Also it’s interesting knowing Gigan was intended to make a comeback and gave a major role before GFW again. I’m always down for more Gigan.

The fandom could have had a joke where Chamelegon was featured in every Godzilla film going forward at some point lol.

Damn sure could have returned in Final Wars.
Last edited by miguelnuva on Sat Nov 09, 2019 8:47 pm, edited 1 time in total.
You can put it on my Tombstone Mothra vs Godzilla> Gojira
my personal take

I quite like this! Chamelegon sounds like a very unique kaiju with his invisible metal abillites and could have been a really formidable opponent! Also,just goes to show Big G never steps down from a fight,even when blind.

I'm curious about that KOTM remake slated for 78 though. I know the plot on the main TK site has it pretty much being the same of the original but is their any noteworthy changes?

Hayato Ichimonji, eh? I'm guessing that name was a placeholder, but it's still pretty funny.

It should also be noted that Chamelegon was also the name of a monster from Mirrorman, in an episode also written by Hiroyasu Yamaura. Coincidence? I think not.

Anyways, I definitely get the vibe of Toho's 70s/early 80s disaster films from this, mainly Submersion of Japan and Deathquake, with stuff like the Prime Minister playing a central role (Like in both those films, and later Return of Godzilla), the repercussions an actual attack like this would have on the economy/populace, the government not listening to the young scientist's warning that turns out to be true (Deathquake) and the love triangle between the three (Deathquake). Certainly one of the more interesting unmade films. Would have been cool to see Gigan again after his anticlimactic demise in Zone Fighter.
Last edited by MaxRebo320 on Fri Nov 08, 2019 1:12 pm, edited 2 times in total.
Beta Capsule Reviews - Your Guide to Ultraman & other Tokusatsu episode-by-episode!
https://betacapsulereviews.wordpress.com

miguelnuva wrote:The fandom cod have had a joke where Chamelegon was featured in every Godzilla film going forward at some point lol.

Wait, you didn't see Chamelegon in Godzilla vs. Destoroyah? They were Destroyah's sidekick in the flick before catching on fire by the flamethrower crew.

tyrantgoji wrote:I'm curious about that KOTM remake slated for 78 though. I know the plot on the main TK site has it pretty much being the same of the original but is their any noteworthy changes?

Actually, from the looks of it, It doesn't seem that way. Think of it more as a Return Of Godzilla first draft sort of deal. I'll update the discussion forum for it with the new information.
Current Quatheral Population: 500!
Current Quatheral's Perfected: 210!