For the discussion of non-Toho monster media, tokusatsu franchises, and also for mixed discussion of Toho and non-Toho kaiju media.
Post Reply
629 posts

2004Zilla wrote:Leslie Jones loses common sense and claims the Ghostbusters sequel is something 'Trump would do'.

This was pretty LOL worthy.

Well that was something. Leslie Jones is a very arrogant and unpleasant person, if that's how she acts.

When a studio's money is involved, right at the top of that agenda, for every department, is: Ensure as many people as possible buy tickets to see this movie.

It doesn't always work, but that's always the goal.

'A' as in each denial involves refuting one.

Actually, I do agree with you in regards to the studios. They're just out to make money.

I do think there is an (absurd) cultural agenda at play in some quarters; there are too many derisive complaints of 'Oh, just another white male lead' or 'not enough [insert minority here]' in reactions to film for there not to be some sort of standard of 'correct' demographics to which some people are comparing... but that standard doesn't belong to the studios. If anything, they may cater to that apparent standard on the assumption it will draw in the maximum number of crowds... but the studios don't generate those standards or concepts of what a film 'has' to have. They just try to appeal to what standards are already there. (And not every casting choice reflects some sort of appeal to that standard, either).

Studios are out to capitalize on what's popular or desired. Not everyone has the same desires or attitudes, so sometimes, they cater to a specific group's standards for what ought to be onscreen and it rubs another the wrong way. And sometimes, what's popular is universally popular enough that capitalizing on it doesn't raise any eyebrows.
Last edited by Zarm on Sun Jan 20, 2019 1:11 pm, edited 2 times in total.

There's an article up on Forbes now, blaming this new Star wars movies for this new Ghostbusters film. Yes, it is one of the smuggest things I've ever seen.

I'm not linking to it, as it might cause brain damage it you read it.

Can we *please* stop this stupid debate? I thought this was over and done with in 2016. 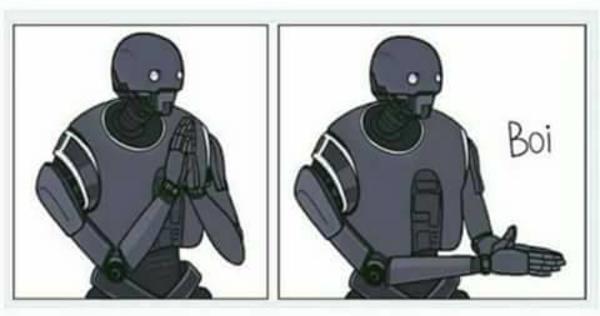 When you get bored search youtube for stuff, anything it'll remove the boredom and desire to go check them out
Last edited by ROMG4 on Wed Jan 23, 2019 2:49 pm, edited 2 times in total.

I was once g2vd, then I deleted my account. I am really silly, but I regret nothing!

2004Zilla wrote:Leslie Jones loses common sense and claims the Ghostbusters sequel is something 'Trump would do'.

This was pretty LOL worthy.

Well that was something. Leslie Jones is a very arrogant and unpleasant person, if that's how she acts.

And not only that, but Paul Feig has actually been defending her. Good luck finding work anytime soon, and Paul Feig's future movies will no doubt take a hit after remembering what a douche this guy has been towards GB fans (or moviegoers in general), calling people ists of every shape and color because, ZOMG, they disliked the shitty GhostBusters reboot. #GetWokeGoBroke

RedLetterMedia made a vid (which I posted on the last page) debunking this whole sexist/misogynist theory, but yet here they are, STILL claiming it didn't get a fair shake because of those evil sexists/misogynists hating on the film for starring women. Nevermind that it cost Sony $60-80 mil because it tanked so bad, can't blame em for wanting to distance themselves from that monstrosity and create a new film in the original universe.

Hell, it has bad audience scores on pretty much all the aggregate review sites (and even after all the review-bombing, it still rounded out to a measly 5.2 on IMDb... 2 years later), gee, maybe it's because they made an objectively bad, unfunny movie. Even a lot of the so-called "fresh" reviewers on RT didn't really like it as the RLM vid also pointed out. Sony's also been caught faking reviews in the past (just like Fox faked glowing reviews for Fant4shit, which I pointed out in its respective thread), that was also in the RLM vid.
Last edited by KManX89 on Sat Jan 26, 2019 1:48 pm, edited 2 times in total.
My Game Ideas Page | My Blu-Ray Collection

I'll never forget the backlash that poor James Rolfe received for his video on the film. His refusal to see the movie was targeted more at the terrible corporate cash grab mentality and the awful timing (being released two years after Harold Ramis had passed) than anything to do with the actors. Yet people tore him a new skreeonking asshole over politely doing the sensible thing and just not giving the movie his thoughts. He just didn't want to see it and he was vilified for that.

Can we *please* stop this stupid debate? I thought this was over and done with in 2016.

Well, maybe if MM, Leslie Jones and Paul Feig didn't CONTINUE to make it about sexism 3 years later, we wouldn't still be talking about it, but they keep making it a point of contention 3 years later, so we'll continue to slam them for it.

The RLM vid I mentioned/posted a page back already debunked this, yet they still insist on making this a spiel against the wyminz. It's doing them no favors with future movies, I mean, good luck to Leslie Jones finding new work any time soon after this and people will remember Paul Feig made (and is STILL making to this day) these comments slamming/guilting people as sexist for not liking the 2016 movie and hurt the box office returns for his future movies. Remember that the internet forgets nothing, dude (get woke, go broke).
Last edited by KManX89 on Sat Jan 26, 2019 3:11 pm, edited 3 times in total.
My Game Ideas Page | My Blu-Ray Collection

Is there an echo in here?

Here's an interesting You Tube video about GB3 and the controversy.

Oh, and this dropped by today.
"All literature is one of three stories: a man goes on a journey, a stranger comes to town, and Godzilla Vs. Megashark. "-Leo Tolstoy.

This looks like it focuses more on storytelling than politics. So it's got that going for it.

The One and Only wrote:[]https://www.vitalthrills.com/wp-content/uploads/2019/12/ghostbustersafterlifeposter.jpg[/]
Oh, and this dropped by today.
[]https://www.youtube.com/watch?v=ahZFCF--uRY[/]

That... looks... interesting, actually? Got me hooked. Looking forward to hearing/seeing more.

Not sure how much of a spoiler it is but just in case....
Spoiler:
The other three ghostbusters and the receptionist are in the movie

I'm pretty excited for it, my father is a huge Ghostbusters fan and he freaked out for this trailer.
"Next time it'll be flawless."

Everyone is coming back. In what capacity we don't really know. Trailer seems to go out of it's way to keep their level of involvement a mystery.
Rocker, paleo buff, cryptid enthusiast, Dragonball fanatic, and lover of comic book, video game, manga, & anime babes!
Follow me on Twitter, if you dare! https://twitter.com/TLK_1983

That trailer makes me miss Ramis even more.

Let me preface what I'm about to say by first saying that I really, really didn't care for the 2016 film. The movie itself was mostly flash-in-the-pan forgettable garbage, but the manufactured culture war controversy and all the forced guuuuuuuuurl power/"if you hate this film you're a sexist" poop was really, really grating.

That being said, at least it felt like a reasonable facsimile of Ghostbusters from the get-go. It was a comedy, with actors known for their comedic roles. It advertised itself as a comedy. The ghosts were all kind of silly, like the ghosts in the original mostly were. It was set in New York like most other Ghostbusters media. It felt like it was at least trying to be a modern Ghostbusters movie.

This feels all skreeonking wrong. The tone, the setting, the cast, all of it. It's too weirdly serious and earnest. The main cast is too damned young. The small-town setting isn't something I would normally object to because New York is a vastly overrepresented cesspit, but...this doesn't feel like Ghostbusters, flat-out. This is blatant kids-on-bikes '80s nostalgia bait at the tail end of a decade that's had it up to here with '80s nostalgia bait. This is trying very, very hard to be like the other two big things Finn Wolfhard is known for - to be like Stranger Things, to be like It. It doesn't feel right at all.

Maybe I'll be surprised, but I doubt it.

Not to mention they're only just now getting to a proper sequel to the original duology long after one of the core creators and actors has passed away? This just reeks of commercial cash-grab, even more so than usual.

And I thought the trailer was fine. I like Paul Rudd, I'll probably eventually see this just for him, but this is a total slap in the face to fans. At least we'll always have the video game.

This trailer was great. It's like Sony figured out that making a movie people wanted to see made more sense than making a movie that deliberately alienates the fanbase of the franchise. I mean they had Bill Murray finally agree after more than a decade to be in a new Ghostbusters movie and they cast him as a character that wasn't Peter Venkman. It doesn't make any sense.

I think we can all agree that Paul Rudd will be possessed by Zuul or Vinz Clortho in this movie. Maybe taking the Luis Tully role.

It's an unusual take to make an entire Ghostbusters trailer with no jokes in it. Maybe they are saving that for Bill Murray.

Imagine if they made a completely serious Ghostbusters movie.

Why did they plan to make minors Ghostbusters this time? What’s next, Camels as Ghostbusters?
Formerly Kaijucole in 2006.
Post Reply
629 posts