For the discussion of non-Toho monster media, tokusatsu franchises, and also for mixed discussion of Toho and non-Toho kaiju media.
Post Reply
442 posts

gigan72 wrote:I am one of the few who likes the 2005 Kong. Something just really.... appeals to me with it. I really liked the V Rexes for some reason.

You'd actually be surprised how many people liked the 2005 King Kong. I heard a lot of people liked it.
Shadow Arena Records:

gigan72 wrote:I am one of the few who likes the 2005 Kong. Something just really.... appeals to me with it. I really liked the V Rexes for some reason.

Maybe it's just from my experience.

I remember King Kong. I wanted to see the remake when I was 9 in 2005, but my mom wouldn't let me because she thought it'd be too scary. I'm waiting eagerly for a 3D re-release because of that.
Shadow Arena Records:

I saw it in theaters when I was 10. The natives scene and the insects scene scared the crap out of me, but I loved it. Now I still like the film, just not as much as when I was younger.

Generally well liked I'd say. Most criticism seems centered on turning it into a three hour epic and excessive CGI.
고질라

Well I remember being there for 2005. I was so hyped and was going to kongisking.net every day for news. Heck! I watched the trailer for the trailer!

When I finally watched it and when I finally cooled down... I liked it but I do acknowledge it could have been better.

1) Get to the island faster! As much as I liked seeing more about the various human characters, you could have easily taken out much of their early scenes and it wouldn't have hurt the movie. For example, you cut out the vaudeville scenes with Anne and cut out the scenes where she's looking to get a job for a Driscoll play.
Instead, her first shot is in front of a burlesque theater/strip club and it looks like she's going to go in. She then looks at the paper in her hand (it has so-and-so's name) before tearing it up and walking away. With that, we know she's poor, desperate and she's a good girl unwilling to compromise her moral principles. All this without all the earlier scenes.

2) Less is more. I'm old enough to remember pre-CGI movies when film makers had to make every special effects scene count and couldn't rely on spectacle. To many modern movie makers take the easy way out and just overload it with CG. For example, I cried at the end of Captain America: First Avenger due to the storytelling but I was bored with all the explosions of Winter Soldier.
So have the dinosaur/monster scenes on Skull Island be less about how many things you can have on the screen at once and more about having each creature used to the utmost.
In Jurassic Park I, the dinosaurs had their own personalities--so to say--and each one was memorable. The murderous raptors, Tyrannosaurus as king of the dinosaurs, the poor triceratops, the gentle and majestic brachiosaurs.

Well those are my two cents. Let this conversation continue!


to the Rex from "The Land Unknown."


And Land Unknown is a Universalfilm!

This is a King Kong 33 model figure from my collection. It was professionally built and painted. I believe the guy that worked on the special effects for the movie Dark Man, did the work.

I mean, it does have it's faults, but it really is a wonderful movie.
"HAY ANGUIRUS"
"WHADDA WANT?"
"SUMPTIN FUNNEH GOIN ON, YOU BETTAH CHECK!"
"OKAY"

King Kong 2005 has always been a great film to me.

It was the first Kong movie I saw in the cinema, although since then I have been able to see a screening of the 33 film on the big screen.

I don't mind the runtime, in fact I prefer the extended edition with all the extra scenes, even if from a critical viewpoint all those things should be taken out to tell the story in a more concise manner, I simply enjoy spending time with all that stuff on Skull Island.

I mean, it does have it's faults, but it really is a wonderful movie.

I concur, & I am a fan also. I also own the KK05 from the SH MonsterArts line, which, IMO, is better than anything in the mainstream toy line from 05-06...

Yah, the 76Kong's roar does sound an awful lot like that T-Rex from "The Land Unknown"...

I like the '05 movie. It has a long list of problems, sure, but they aren't enough to keep me from having fun watching it. Kong himself was handled very well, which counts for a lot.

I have quite the soft spot for the Dino De Laurenttis remake of the classic. It was my first exposure to the original Monster King when I was in the early part of my single digits. 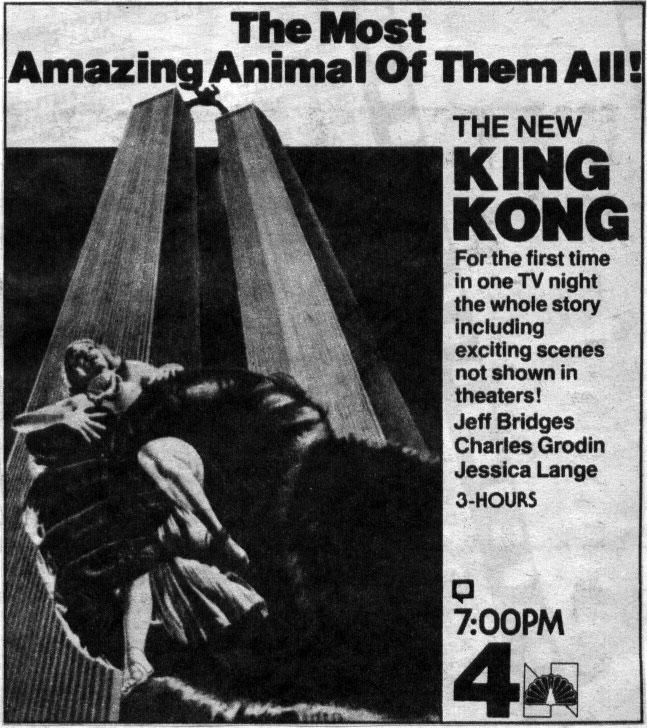 Although, I think until I watched its sequel, KING KONG LIVES !, that I thought the title beastie was actually a giant robot that the crew operated. I remembered this after reading a retrospective in G-FAN on the various incarnations of Kong through the years right before the release of the Jackson flick. The robot in question, only showed up in all its glory in the scene where Kong was unveiled at the Petrox rally. But apparently, Paramount, and DeLaurenttis both put it out there that every time Kong was on the screen, you were seeing the robot in action. Not Rick Baker in a well done gorilla costume. The flick, for all the unreasonable hate it gets, even ended up receiving the Academy Award for Best Special Effects. An award, that angered Academy Award winning stop motion effects artist, David Allen, to such an extent. Who almost got the effects job on Universal's planned , but derailed due to DeLaurenttis' film, The Legend of King Kong, quit his position on the Academy in protest.

Also on the 1976 Kong, I have to give props to composer John Barry for his score on the film. On of my favorite parts of the flick is early into the film where Fred Wilson(Charles Grodin) is making his presentation to the crew of the Petrox Explorer about the island, and Jack Prescott(Jeff Bridges) interrupts. Then goes on to tell about some other unfortunate souls who've set foot on the Island of the Skull. Quite an enthralling telling. Wouldn't have minded seeing those stories expanded upon.
"All literature is one of three stories: a man goes on a journey, a stranger comes to town, and Godzilla Vs. Megashark. "-Leo Tolstoy.

Lets talk about the 2000 animated series and its 2 films.

Any opinions on it?

Didn't really like the premise of it, haven't seen it in a long while.

I liked it for what it was when I was a kid. Never saw more then a few episodes. Thinking of picking up the dvd set on amazon.
Don't try to be something else. Don't try to be less. Great things are going to happen in your life. Great things. And with that will come great responsibility.

monster0 wrote:This is a King Kong 33 model figure from my collection. It was professionally built and painted. I believe the guy that worked on the special effects for the movie Dark Man, did the work.

Wow that's really cool. I like how lanky he is.
~ Tyler

I have the McFarlane Toy, Movie Maniacs KING KONG figure.

Also when the sadly now defunct K-Bee Toy store went out of business, I snagged the 2005 King Kong figure that included a V-Rex. 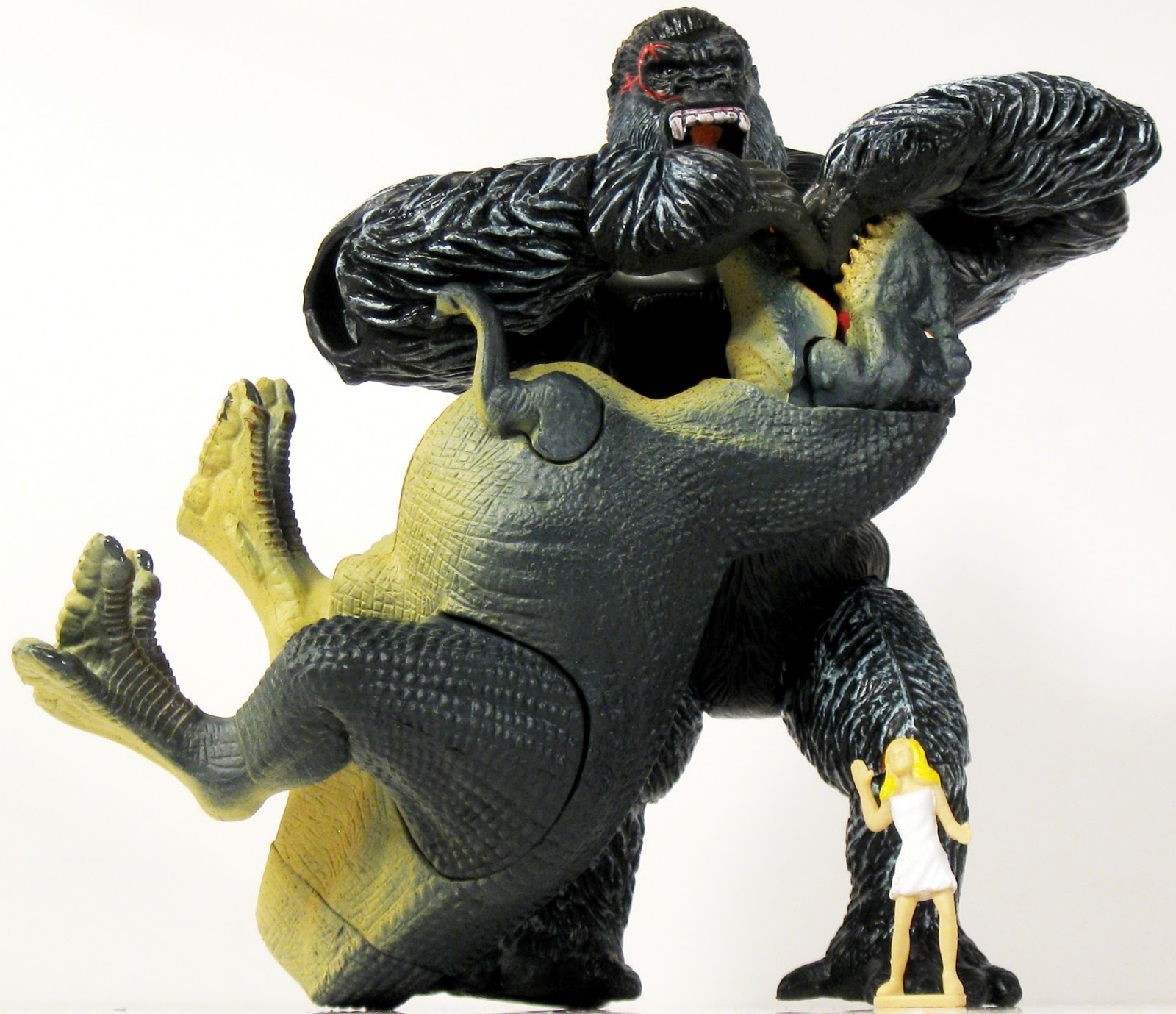 Found that at a Bookmans once for 40 clams. Really wished I had snagged it.

The One and Only wrote:Also when the sadly now defunct K-Bee Toy store went out of business, I snagged the 2005 King Kong figure that included a V-Rex.

I have a question. I remember reading about in the 1980s somebody colorized King Kong and it played on TV does anybody have some more info on this?
Godzilla
Post Reply
442 posts