For the discussion of Toho video games and video games of Toho related characters only.
Post Reply
105 posts

KManX89 wrote:To be fair, though, King Ghidorah is widely-regarded as one of, if not the strongest kaiju ever, yet he's the first boss in the Super Godzilla game and a total pushover at that.

Ghidorah being a pushover is consistent with how strong he actually is: not very strong at all.

Only in the game Super Godzilla, in the movies, he's pretty much always needed help one way or another to beat him (though it's debatable if he really "needed" the interference to beat him solo in GvKG). Then again, the game itself isn't particularly hard, just tedious and not very fun.

It's debatable if she's even as strong as regular Ghidorah. I can see a case being made for any version of MechaGodzilla, but Biollante? Case and point, she's the first and easiest boss in Godzilla Generations: Maximum Impact, if we're using games as the basis of our arguments.
Last edited by KManX89 on Tue Jul 31, 2018 5:49 pm, edited 4 times in total.
My Game Ideas Page | My Blu-Ray Collection

I like Bagan and think he has a great design. But I do wish that he had his own powers.

I think the design used in Super Godzilla and that other CD game is terrible. But the Chimera idea is cool. If that version of Bagan showed up in a movie, I'd have no problem with that.

Alternatively, just make up any old monster and call that Bagan. Either way we'd be done with the whole matter.

He's got a great design and i kinda wish he'd get the chance to show up on a film, but i do agree he gets quite overhyped and overrated easily.
https://www.deviantart.com/dinomariozilla

So say Legendary announces Bagan as the end all be all for the Monsterverse. Would you guys dislike the idea since he was used in a game and has a big following that have wanted him in a film for years? Or would you be open to it, and if so what would be needed for you to be like "That's the film I HAVE to see"

He was never big on my list but I see why some would want to see him. He would've worked for the Heisei era but not so much any of the others
Last edited by _JNavs_ on Fri Feb 01, 2019 7:57 pm, edited 1 time in total.

_JNavs_ wrote:So say Legendary announces Bagan as the end all be all for the Monsterverse. Would you guys dislike the idea since he was used in a game and has a big following that have wanted him in a film for years? Or would you be open to it, and if so what would be needed for you to be like "That's the film I HAVE to see"

I feel like he'd be in need of a reinvention. Super Godzilla didn't really give much to work with personality-wise; I don't know how well the "mega evil final boss" thing would fly in a modern movie. The idea of a creature powered though the tampering of its cells is still a unique concept, but reusing the exact same plot from the game wouldn't be as exciting.

It didn't seem do anything for Pacific Rim: Uprising.

i don't like him. i don't HATE him but he never came off as anything special to me. i thought his design was quite plain and the powers he has is nothing special. i'd be totally fine if he just stays with Obsidius and Krystalak in the video game pile because quite honestly i don't want to see him in a movie.

A guy who randomly stumbled upon this place one day, invested much too much time into it, and now appears to be stuck here for all eternity..and i do not regret it.

Eh, never even registers in my mind.

When playing Super Godzilla back in the day, it was neat to get a new monster as the final boss.

And the behind the scenes stories about how Bagan was set to be in so many different projects, but they kept getting the axe, is a funny Godzilla tale for fans.

Other than those things, he isn't that big a deal to me.

I prefer the versions from the Resurrection of Godzilla and Mothra vs. Bagan drafts

He's inoffensive to me. Don't hate him, but don't really like him.

Though I do kind of hate the way that he's made to be so ridiculously overpowered in K.W.C. But that's not really a problem with the character itself. Just with a few K.W.C. writers

"The time has come, finally, to put our technology to the final test."
-Dr. Asimov

Super Godzilla and Bagan will always haunt/plague us.

Although I have a soft spot for this guy 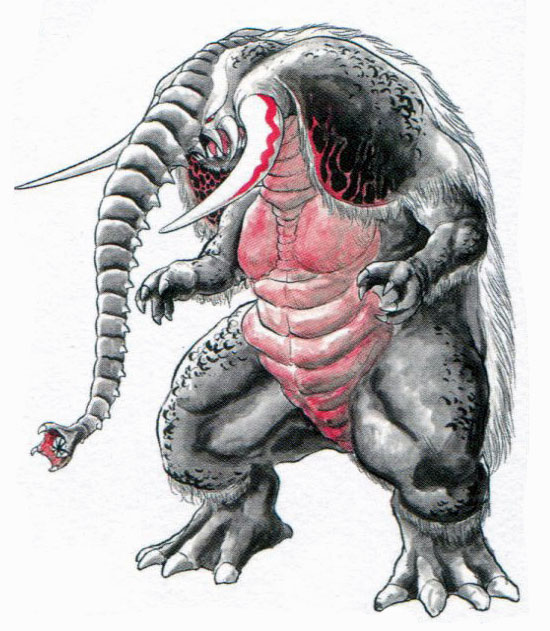 I would kill to see Angry Elephant Man in a Godzilla movie one day, whether he's called Bagan or not.
"Name me one fight where Anguirus didn't get his dick kicked in."

Bagan rocks! Maritonic told me so!

I'd like to see him in film, but it would kinda kill his mystique too. I've always seen him as the Godzilla fandom's sasquatch or other cryptid. He has so much information out there, and there is that awful footage of him from a few decades ago that people go on about all the time. But if he finally truly showed up in a film, everybody would go "hey, there he is. Cool." Then the world would spin on and he would just be another monster. Without all of the backstory and the fact that he kind of appeared tangentially in a game, he is just kind of a basic big bad monster to defeat.
Last edited by Steel Hellkite on Wed Mar 13, 2019 6:21 pm, edited 1 time in total.

Bagan sucks.....a kaiju that appeared on the Super Nes years ago that became a meme to enrage Godzilla fans has become stale predictable and boring.