Discuss and Describe any weird dreams you’ve had involving Toho Kaiju. I’ve had a few very specific weird ones, mainly involving me finding incredibly obscure “non existent Kaiju films”. Describe them as much as possible, in as much detail as possible. Get as trippy or as nonsensical as possible.

Anyways, last night, I had a dream involving me watching King Kong vs Varan (yeah). King Kong in the film had a TAIL, until Varan bit it off. Anyways, in my dream, there was a prettt brutal scene where Varan ate a bunch of explorers that were hiding out in trees. Varans head poked through the trees and just grabbed them. After that there were some other scenes flashing in my mind, like a fight between Varan and Kong but it was all cool

I once had a dream where Dogora and Gezora were fighting each other, but Dogora won and started to 'eat' Gezora. Dogora soon mutated and grew some of Gezora's eyes and tentacles randomly over it's body. It then started to blanket the entire city with black fog, which caused people's skin to turn into ink and turn them into jellyfish people.
Current Quatheral Population: 500!
Current Quatheral's Perfected: 244! 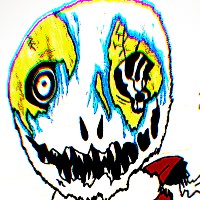 I had two weird dreams about Monsterverse films.

First, was me in the theater watching a different Kong Skull Island teaser where it turned out Skullcrawlers were juvenile Ghidorahs.

Second was me watching Godzilla: King of the Monsters, and it was weird.

It started with Millie Bobby Brown character and her parents getting on a plane. Millie gets scared and doesn't get on, which is good as the plane ends up being destroyed by Rodan. Millie is raised by Kyle and Russel and soon forms a bond with Rodan, which is remarkably mature. Anyways, Ghidorah shows up and starts fighting Godzilla. Mothra appears and convinces Millie to send Rodan with her. They then work together...to get them to stop fighting. See in the dream, GHIDORAH ISN'T THE VILLAN. He's part GMK guardian and part Rodan' s role in GTTHM. Anyways, the 4 team up and fight some sorta villain who looked like a massive, Biollante sized Skullcrawler, which I think might have been Ramarak.